Bachelor of Science in Architecture Curriculum

The first year studio curriculum introduces various techniques in drawing, model building, and digital production as organizers and generators of both architectural (first semester) and urban design (second semester). Critical observation, inquiry, and thinking methodologies are introduced through a sequence of short assignments that build on one another and focus on architectural concepts such as form, space, proportion and scale.

In the second year, the focus in the design studio shifts to technologies within architecture. First semester studio assignments focus on conceptual investigations of fundamental principles of the making of buildings, including structure, enclosure, circulation, program, site, and light. The assignments, which build on the techniques introduced in the first year, provide a means for the student to speculate on what typologies, such as a Mixed Use Tower, could be. Second semester studio projects address complex concepts and principles of module and materiality, construction, and aggregation through physical models and advanced digital modeling. In addition to design studio, the student takes a concurrent two-semester sequence in architectural theory/criticism - in which there is a focus on oral and written communication - as well as a two semester art/architecture history sequence.

The third year curriculum orients toward the larger scales and increasing complexity of urban design. The fall semester studio explores metropolitan public space through the design of a programmatically complex urban landscape. The theory/history class investigates different agendas and strategies that architecture has employed in relation to the existing city and the city's ability to act as catalyst for ideas and speculation; the concurrent technology class introduces means of deploying and conveying constructional logic with an emphasis on developing an aesthetic means of graphically communicating constructional information. In the spring, the design studio speculates on the urban interior through the development of a large mixed-use building. The theory/history class introduces critical and generative approaches to twentieth-century architecture and theory. The spring technology class builds on the lessons of the fall with a focus on a technical understanding of building construction.

The fall and spring semesters of fourth year offers the student an "option" of the emphasis of their design studio, based on their individual interests and the project options offered by the studio faculty. In their varied topical interests, option studios range from the scale of a facade or house to urban design. In the fall the student is offered an "option" of emphasis in seminars on contemporary practices. A year-long structures sequence runs concurrently with the studio. 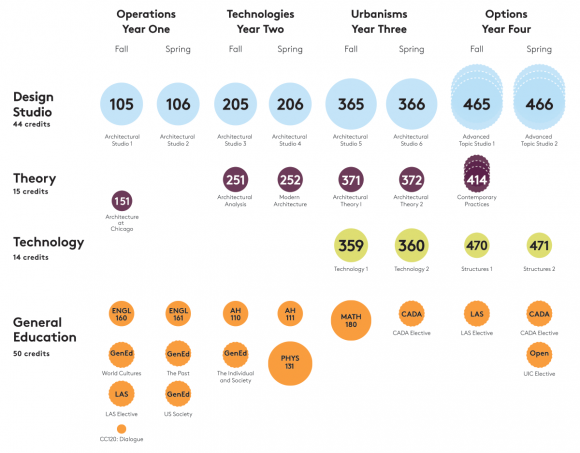